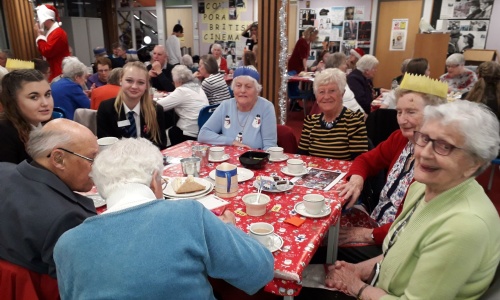 Our year 12 Health & Social Care group were asked to organise and hold a Christmas party for the older residents of our local community at the start of December.

For this party we were required to provide food, drinks and entertainment for those who would be attending, and so we were given the tasks of food shopping, decorating, preparing food and hot drinks, and organising games such as bingo alongside a quiz! We also decided to hold a raffle on the day so that we could present some of the attendees with gifts just in time for Christmas.

On the day, we involved a select group of year nines, who sat with the residents that attended, and made them feel welcome and included by talking with them and joining in with activities. Many of the year twelves and thirteens that were part of the day prioritised preparing the food in the morning and offering it to the attendees when they arrived - others ran the entertainment and spoke to the people that were there. We even recruited a fellow year twelve to play the part of Santa!

Over the course of the party, we got to speak to some wonderful people and we were able to have a laugh with them too! Many, if not all, of the elderly people appeared to thoroughly enjoy the party and we were sent a lovely Christmas card, which thanked us all for organising and holding this party.