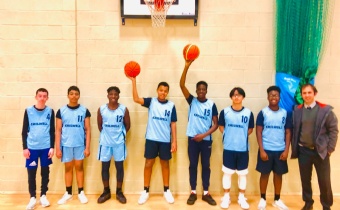 Chilwell school continues to have sporting success in our fixtures.

Our Y11 basketball squad took part in a tournament at George Spencer. We played magnificently through the group stages to qualify for the final - where we lost narrowly to eventual champions George Spencer.

In addition, we had another huge win for our Y10 Football Team, against a very well organised and robust Becket School.

Kein scored a magnificent hat-trick and the enigmatic Jordan  (playing up a year) scored the other in a hard fought victory.

We are very proud of all the boys for their immense work-rates and resilience to overcome such a difficult opponent.

Anyone of them could have been 'Man of the Match', but my vote goes to Charlie, playing up a year, asked to play in a new CDM role and unselfish in his play to allow others around him to flourish in possession of the ball.

Come on you Swans!