Year eleven squad through to the semis 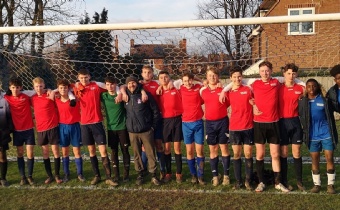 The game started brightly for Chilwell with Willows and Shepherd working in tandem to dominate the midfield and provide plenty of ammunition for the dynamic duo, Morgan and Gent upfront.

Against the run of play, our defence was outpaced by the West Bridgford right winger and he fired into the near post, with the ball ricocheting off the unfortunate Taylor.

Bridgford scored again soon after with what looked like the goal of the game, with a beautiful struck half-volley that gave Taylor absolutely no chance to save.

At the other end of the pitch, Chilwell seemingly had no luck. First, Morgan hit a wonderful shot from distance that crashed down from the underside of the bar. Despite the protestations of our linesman, Farmer, the referee refused to allow the goal.

Next, Gale, who ironically spend much of the game running like the wind, saw his clever effort on goal hit the post.

When all seemed lost, it became clear that the next goal would probably decide the outcome of the fixture. Urged on by the irrepressible Mr Taylor, Morgan continued to dominate the West Bridgford defence and was finally rewarded with a goal, calmly passing the ball past the approaching keeper.

At 2-1, Chilwell were back in the game and straight from the kick off, Gale stole the ball off the toes of a defender and fired hard and low into the opponents net. 2-2!

Half time gave both sets of teams a chance to catch their breath and Mr Taylor another opportunity to impress the importance of hard-work, desire and resilience.

Again, almost immediately, Morgan powered his way into the penalty area and was clumsily fouled for a definite penalty.

With a plethora of potential penalty takers, it was Gale who took the responsibility of taking the kick. He hit it hard and low to the keepers right. The keeper guessed the right way but saw the ball bounce into the top of the net. 3-2!

Chilwell were now in the ascendancy and looked to be dominating the game when suddenly one of our players harshly received two yellow cards in quick succession. 3-2 up, but with about 30 minutes left to play and only 10 men, it seemed unlikely that Chilwell would be able to hold on to their narrow lead.

Mr Taylor dealt his final hand, by asking Gale to play in midfield. Leaving Morgan to forage for scraps upfield as a lone striker.

Phoenix Taylor in goal, was magnificent for the remainder of the game, making save after save to deny an ever dominant West Bridgford attack.

Our defence of Jackson, Dickens, Parry and Baldwin really were superb in their tireless efforts to deny West Bridgford an equalising goal. After another clearance from the back, Morgan won the ball in the centre of the park, pushed the ball wide past his opponent and then looked up…

No one else had seen the six foot plus keeper slightly off his line. Morgan however like a Chess Grand Master was several moves ahead of everyone else and sublimely lobbed him with a curling, dipping shot that deserved to win any match at any level of the game.

An outstanding performance by each and every player that reminded me of Pele’s famous quote, ‘Success is no accident. It is hard work!’